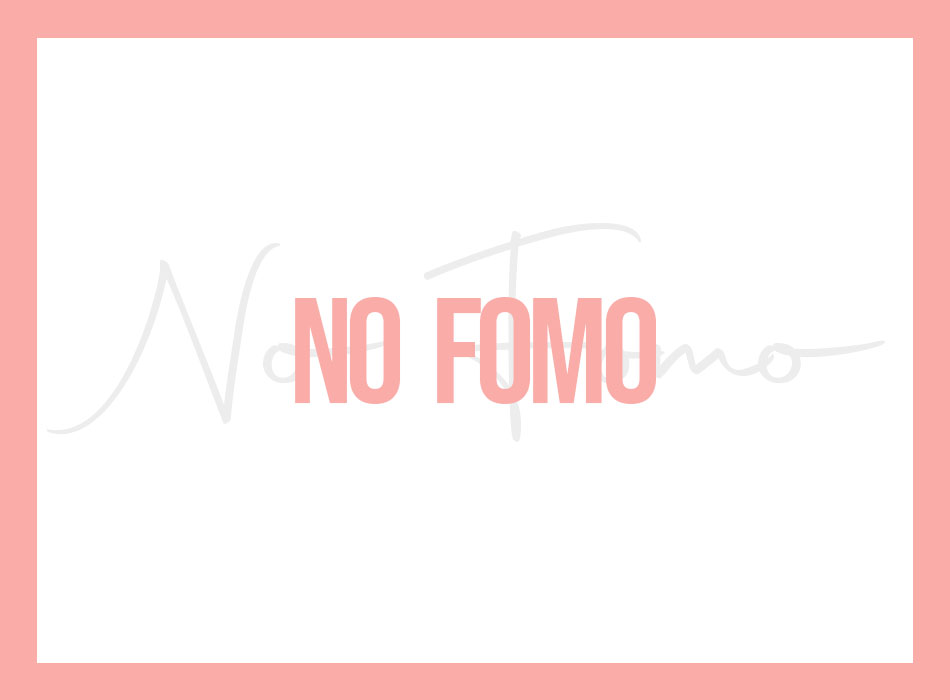 F.O.MO… It’s an acronym. If you haven’t heard or used this before, I’ll catch you up. F.O.M.O is a syndrome that most extroverts have and some introverts are susceptible to. It stands for FEAR OF MISSING OUT. This phrase is usually used in conjunction with a group-hangout and the exclusion of another person. If the person being excluded has major FOMO, then those within the group will taunt him or her with enjoyable pictures, and or videos of everyone having fun without them.

Because I am an introvert, in most occasions, I am F.O.M.O intolerant. But, when it comes to my life and career, let’s just say that F.O.M.O has a way of creeping into my life. I think if we’re honest though, we have all struggled with this type of  F.O.M.O in one way or another. Whether it’s fear of missing out on Gods will for our lives, or fear of missing out on OUR plans for the lives we’ve “given” to God. And if we’re not careful, FOMO will run and ruin our lives.

Years ago I preached a message about overcoming fear through the power of the word of God to a bunch of elementary Kids. Believe it or not, the children’s pastor asked me to come back and preach that same message to her morning small group of parents the next week. I said no. I was honestly so afraid that the message wouldn’t translate, even though she’d intently assured me it would.  But I realized something very powerful then. Fear is one of the most diverse enemies of our souls, futures, and lives. This evil spirit can transcend cultural, generational, and seasonal barriers. It can take on any shape and attack anyone, anywhere.

I remember when the seeds of fear were planted in my life. As a little girl, I struggled with fear of the dark. It would paralyze me. I would lie in bed, unable to move as fear crept into my room. The dark would shape-shift right before my eyes, and the walls would close in. I would hear footsteps in an empty room, and all I could do was lay as still as possible. My saving grace was always my daddy. I would scream his name as loud as I could, and he would swoop down and come to the rescue every single time. After while though, things had to change. And I’ll never forget when they did.

It was a night just like any other. I starred at the ceiling in my cool and damp bedroom, hoping all would remain still and safe. We had a nice-size house with three bedrooms downstairs in the basement. Fear would never suddenly appear, it would always creep in, almost as if it enjoyed the escalation of a grandiose entrance. Before I knew it, I would see movement in pitch black and my eyes would shift, attempting to keep up. I would hear sharp sounds, see slight sights, and finally…. call on my father. I could always hear him rush out of his bedroom one floor above my own. His bigger-than-me-body barreled down the staircase and through my door. I knew the enemy was going to have to leave.

“What’s wrong?!” he would ask. Dad was always out of breath from running to my rescue.

“I’m scared, Dad.” My covers shoved up, cradling my face.

Just the same as every other time, he sighed and inched his way to my bed. “Dominique… It’s time for YOU to start rebuking the devil.” This was the moment when Dad gave me something I’d never forget. He gave me my own sword. He gave me scripture. I think he was well-aware that fear of the dark would never stop there, that as long as I was living, my enemy would be fighting me.

And he was right. I did need my own sword. Within a few years, fear of the dark had morphed into fear of rejection, and when it was time for me to chase my calling, fear of rejection became fear of missing out. FOMO. Many of you reading this blog are realizing that your FOMO didn’t begin as FOMO, but as another form of fear. Hopefully reading this has stirred up some form of rage toward the enemy. If so, then lets take this journey together and deal with FEAR OF MISSING OUT.

The form of FOMO that I want to tackle today could also be deemed Fear Of The Future. It is the fear that the desires in your heart will not be realized, and that you will somehow end up with just and “OK” life that God sort of patchedtogether. It is the fear that you will sit and watch everyone else get blessed while you work hard, only to be given the leftovers of the best life has to offer. NONE of this is true. But somehow you have chosen to believe it.  Social media doesn’t help as most people only post their highlights. So, the only thing we see are their wins – God forbid we see any losses.

In truth, many of us not only feel FOMO, we are driven by it. We may not even realize it, but it constantly feed’s into our skewed view of The Father, causing us to rush into decisions that we should be praying about. FOMO is what causes a wise person to make dumb decisions in fear that the “Window of Opportunity” will close on its own. (The Window of opportunity that GOD opened) I don’t know about you, but that sort of rushing has caused many painful regrets in my life and the lives of my mentors. I honestly believe that the best advice I’ve been given for this season is, “THERE IS NO RUSHING IN THE KINGDOM.”

As I’m writing this, I cant help but think about the moment one bible character made the greatest mistake of her life. Sarah was a beautiful woman. So captivating, in fact, that everywhere she and her husband went, he feared for his life. Can you imagine having everything a woman could want, minus the ability to carry a child? At the age of 75, her husband was given the promise of a son. And at the age of 100, that promise was fulfilled. It’s pretty incredible ya know? God’s faithful promise outlived even their desire for a son. By the time the angel of the Lord showed up to get things rolling, the dream of having a son had been scratched off the bucket list and replaced with “Just Stay Alive.”

But, we all know how this beautiful story unfolds even beyond Issac. It’s marvelous! However, during the moments in between the promise and the fulfillment of the promise, – approximately 25 years – I do believe Sarah suffered a dire case of FOMO. Let’s paint a more vivid picture of how this might have all played out:

Sarah peered through the thick, purple curtain. She gazed longingly at Hagar. Her skin was so soft and supple. She was young and strong; strong enough to bare many children. Ugh.. Even thinking about that word, children, made her cringe and bitterness edged its way in. Hagar, the object of Sarah’s internal conversation, was bathing and washing her body of the last month’s hard labor.  Sarah’s starry eyes filled with tears as she gazed upon the waste of a beautiful young naked body. Why would YAWEH promise her a child if he was never going to fulfill that promise? Did he want to tease her? Sarah was 74 years of age and every bone in her body ached as they’d borne the weight of bareness.

Maybe the truth was the exact opposite of what they were believing for, she thought. Maybe she had done something offensive that angered YAWEH… Maybe, YAWEH was preventing her from having a child. As she stood behind the curtain, wrestling with these thoughts, it was as if an angelic light surrounded Hagar’s bare, brown, and broad shoulders. It seemed crazy, but it also seemed logical. She whispered with a revelatory tone, “The promise does not just happen.  It was given to us and I will be used of YAWEH to make this promise come to pass.”

Now, we all know that this is most likely not what happened, but somewhere along the way, Sarah had the bright idea of giving her maid to Abraham as his wife. She felt like if she didn’t make things happen, God wasn’t going to get things done. Isn’t that just like us? We catch a quick case of FOMO and we start going around kicking down doors that we weren’t even meant to walk through. Then, when the doors open, they end up being more of a hindrance than a blessing. And before we know it, we’re blaming everyone but ourselves for the mishap that we brought on ourselves.

We’ve got to learn to trust God to make things happen! It’s so funny! In congregational settings, we rave and hail God the true, faithful and just one. Then, we leave the congregation and fail to trust him to do what he said in our individual lives. You know one of the best ways to test a prophetic word? LET IT HAPPEN!!! Move on with your life and say, “Well that’s a big promise, but I trust you Jesus.” So many of us don’t realize it, but if we simply continue to live uprightly before God and move forward, we’ll run smack dab into our prophetic promise!

And when I think about it, ABRAHAM COULD HAVE DONE SO. He didn’t need to name or claim anything. He didn’t even have to pray it through! He only needed to live his life and trust God. How do I know this? Because when it was time, the promise came to HIM! And if you think about it, the promise arrived even after he did something so catastrophic as having a kid with another woman!

(Side note and random thought: I wonder what the conversation was like between he and Sarah after Hagar got pregnant. I mean, at that point I’m sure they were very-well aware that Abraham’s soldiers were marching just fine; That the problem was not Abraham’s seed, but rather Sarah’s barren womb.)

Now, don’t get me wrong! I am a woman of prayer and I believe in praying things through. (See Daniel 10) But, it took a lot of pressure off when I realized that God, in his sovereignty operates within his own SOVEREIGN TIMING! And in my opinion, the only thing that could mess things up for me on the way to my promise, is FOMO. Friends, do yourselves a favor and don’t ruin the ride! Your promise is on the way, but don’t ruin your waiting season by creating things that will forever combat your promise! And when you pray concerning these things, don’t pray with fear. Pray with faith. Let’s take this a little further! Stop jumping at every opportunity because you’re afraid that your God opportunity will never make its way to you. God has so much for us, and during the time in between, I want to have fun enjoying my life without fear and trusting God’s process.